Probably 90 percent of people who know at least something about the history of photography have heard the famous quote from Henri Cartier-Bresson about the decisive moment:

“To me, photography is the simultaneous recognition, in a fraction of a second, of the significance of an event as well as of a precise organization of forms which gave that event its proper expression.”

Everyone is sure that the decisive moment is the main feature of the great Henri. Let’s say it is true. Then, if it is appropriate to compare photographers with hunters, Bresson is not the type of a hunter who would rush into the woods, sticking his tongue out. And for him catching the prey is not the decisive moment. The concept of “decisive moment” involves a lot of patience instead: to sit in ambush and wait until the very moment of the desired prey neatly appearing in the right place for the precise shot.

Let us return to the photography language. To capture the “decisive moment” you need to accurately build the frame of the shot, then to make a prediction where the main subject would perfectly fit, patiently wait until it is there, and press the release button. If you look closely at Cartier-Bresson’s pictures, you will find that most of them were actually taken using this exact algorithm. The only difference is that in some cases the photographer probably had to wait  several hours, but in other cases – a few seconds.

Before we continue, here’s a quote from Bresson himself:

“Sometimes it happens that you stall, delay, wait for something to happen. Sometimes you have the feeling that here are all the makings of a picture– except for just one thing that seems to be missing. But what one thing? Perhaps someone suddenly walks into your range of view. You follow his progress through the viewfinder. You wait and wait, and then finally you press the button– and you depart with the feeling (though you don’t know why) that you’ve really got something. Later, to substantiate this, you can take a print of this picture, trace it on the geometric figures which come up under analysis, and you’ll observe that, if the shutter was released at the decisive moment, you have instinctively fixed a geometric pattern without which the photograph would have been both formless and lifeless.”

Let’s try to analyze not the most famous picture of Cartier-Bresson for example. 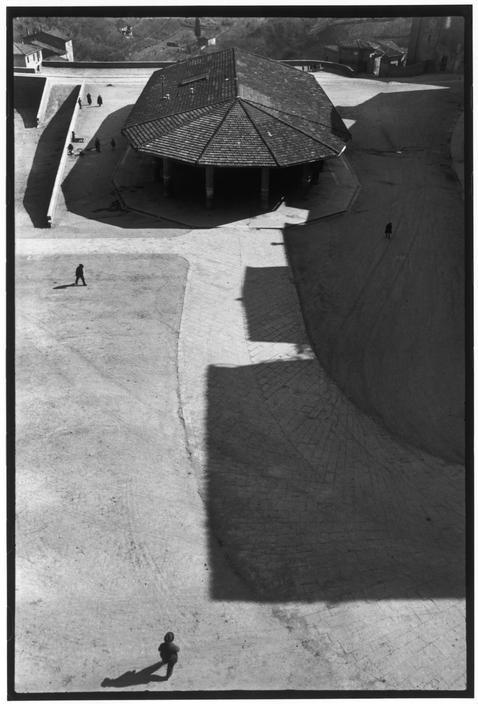 At first glance, it is obvious that the image has a balance of light and dark areas, but the position of the two small figures crossing the yard might seem to be rather arbitrary. However, if you draw a few imaginary lines, it turns out that these figures fit perfectly into the geometry of the picture. It is easy to notice that the lower figure is on the line that can be drawn from the corner of the roof’s shadow (see pic below). 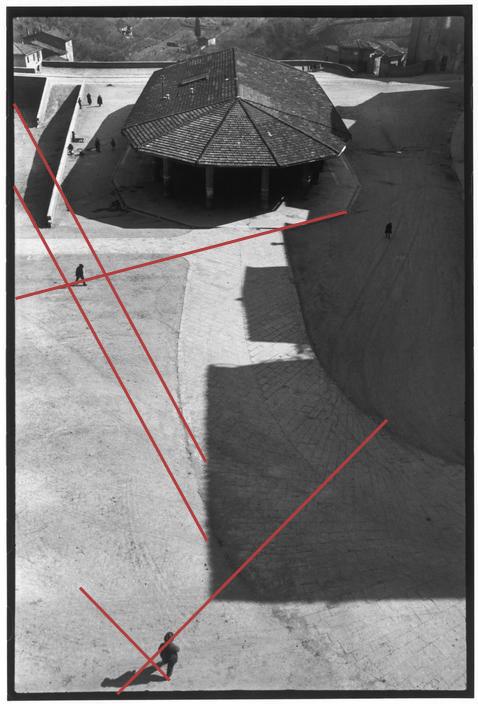 If you look closely, you can see that the lower figure and its shadow form a right angle, and as you notice there are many right angles in this picture. Try to count how many right angles there are! Also, try to visually remove that lower figure from the picture, how does it make you feel? Doesn’t it feel like these shadows are going to fall off the frame? It is as if this person magically holding these right-angle shadows aloft.

The other figure fits into the geometry of the picture not as strictly as the lower one, but this figure is a direct extension of other lines you see in the picture. These lines form a harmony of sorts within the frame. For example, if you look closely (yet again!), you can see that the lines of on the roof form triangles, you can see a similar triangle that is formed by the duet of two figures and shadows of the buildings. Undoubtedly, this photo has many other interesting lines and combinations. I urge you to discover the patterns by yourself.

Analyzing photos of Cartier-Bresson, both successful and not, is a good practice in order to start doing it with your own pictures. Just keep in mind that you analyze successful or famous pictures to understand how a picture was taken and what patterns saw the photographer. And you need to analyze unsuccessful pictures to figure out how to do better next time.

Among other things, remember that Bresson, like any other photographer, did not produce a masterpiece just by pressing shutter-release button. Surely, he made a lot of bad shots, but he did not show them to anyone, all of the best pictures were carefully culled by him. That is why we know Henri as the great master. 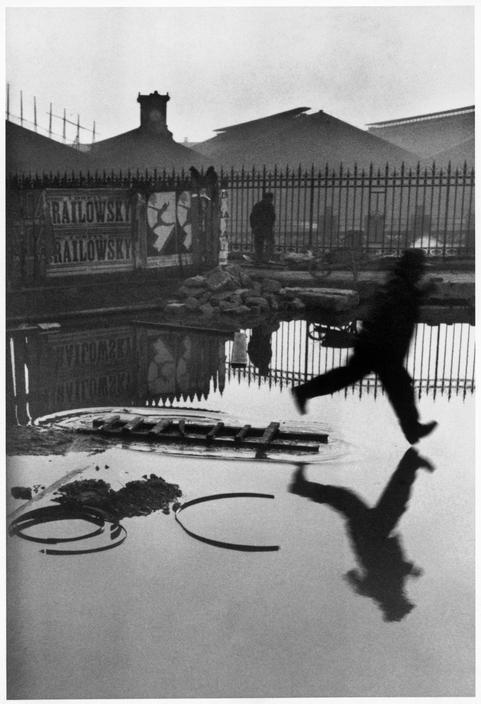 This picture is a treasure trove of all sorts of similarities. When you first look at it, you are affected by the energy of the moment: a man jumping over a puddle is caught in a truly magnificent pose! But this was not enough for the master! Look closely and you’ll discover a small figure of a ballerina on a circus poster. Her pose is almost identical to the jumping figure. But that’s not all! Both figures of the man and the ballerina are reflected in the water. The legs of the jumping man with their reflection form almost the correct pentagon, which is visually equal to another pentagon that is formed by the reflection of the fence. Let’s draw some lines over the picture to understand the geometry of this masterpiece. 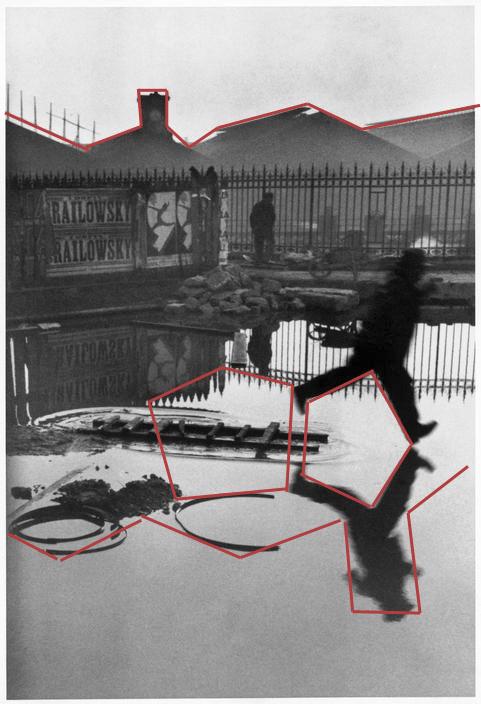 The ladder in the puddle visually rhymes with the fence behind the jumping man and with a fence on the roof. The geometry of reflections rhyme with the geometry of the roofs. All these geometry comparisons may sound cumbersome and quite silly at first, but if you look long enough, all these lines become clearly visible.

It is no secret that Cartier-Bresson came into photography with classical art education. He knew composition techniques of classical fine art. One of the main rules concerns the relationship between a figure and a background. It’s a very simple technique, the image is easier to understand and it is pleasant to the eye if dark objects are placed in front of the light background or vice versa. A very typical example is the portrait of a prostitute from the street Cuauhtemoctzin.

The white door serves as a background for black hair and women’s black shirt. Black hair and t-shirt, in turn, serve as a frame for the white face and the chest, then the white face makes the black eyes stand out. But Bresson would not be himself, if he would not include in the picture the dark strip of space of the room – it perfectly balances the entire frame. Masterful! 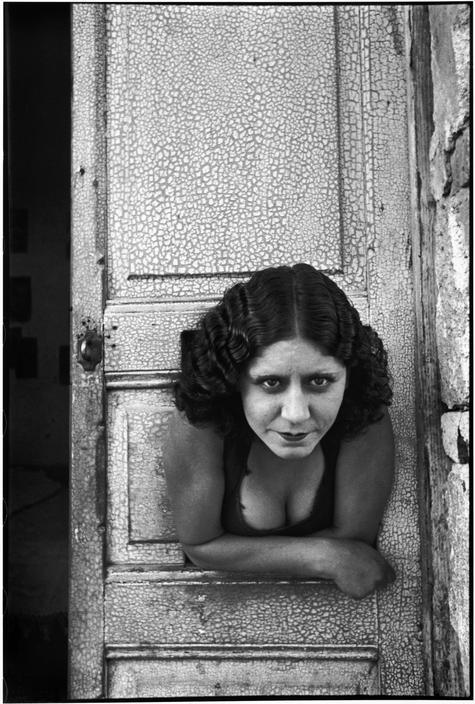 The following photograph of the master is equally interesting. It is taken on the island of Sardinia in 1962. 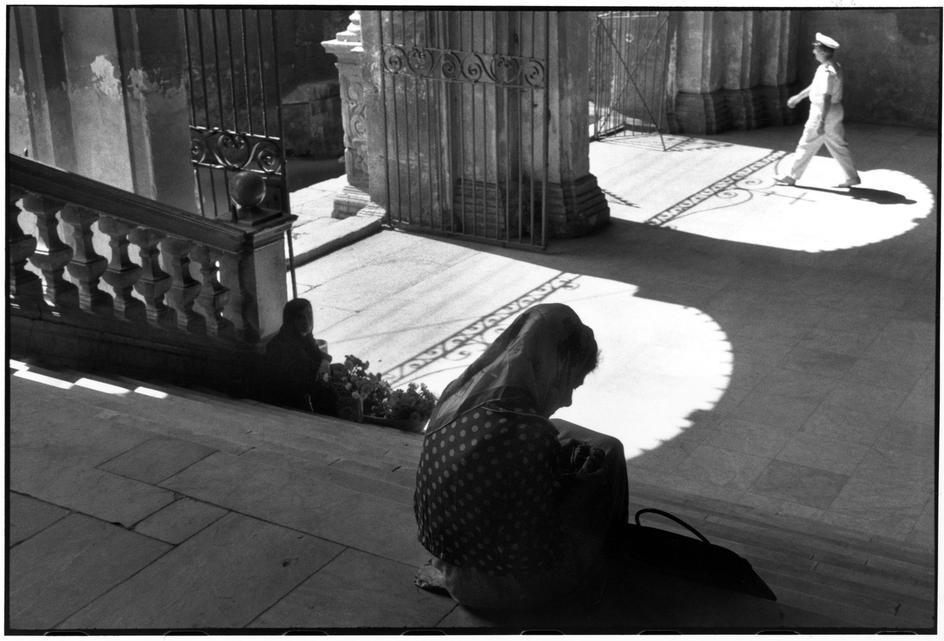 Bresson managed to squeeze a few figures into one photo: a dark figure of a woman on a white area in the foreground and a light figure of a sailor on a dark wall in the background.

This constant change of light and dark areas, as in the previous picture, hints the next important concept of the composition – the rhythm (check St. Lazar Station again!). This topic is so big and important that it would be a crime to tell you about it in just one paragraph. Therefore, I will devote another article to this intriguing topic.

Let’s sum up what we learned today from Henri Cartier-Bresson.

First, the decisive moment is not only the climax of the action, but it is also all the elements and factors that came together only to fall apart in a split second. It is important to build the frame carefully, then wait until the missing object to appear. Analyze the geometry of the images, both successful and unsuccessful.

Second, the main subject must be separated from the background. If the object is light-colored, it should be placed on a dark background, and vice versa.

In conclusion, I would like to note the thing that might seem obvious – a well-thought composition is not enough to make a good photo. Visual language with all its beauty and geometry is only a sweet half of a masterpiece. The other important half of the picture is its content, at least in the documentary or contemporary photography. The substance is usually more important than the form, meaning that, photographer should have “something to say.” And I insist that this “something” should be personal because true art has to come from the heart.